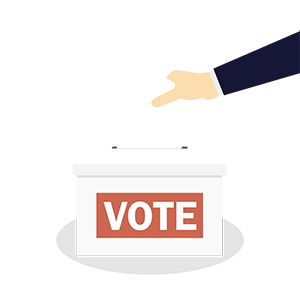 General Election
A General Election is the election in which federal and state officers, members of Congress and of the general assembly, county and township officers, and other officers appear on the ballot. General Elections are held the 1st Tuesday after the 1st Monday in November of each even-numbered year.

Monday, November 7
Last day to vote absentee in person at the Auditor’s Office.

Monday, October 24
Last day to submit a written request form for an absentee ballot to be mailed.
Last day to pre-register for the General Election
Auditor’s Office open until 5pm.

Wednesday, October 19
First day Absentee Ballots may be mailed or voted in the Auditor’s Office.
First day public notice may be published.

Friday, August 26
Last Day for Vacancies - County
If a midterm vacancy in a county office occurs on or before this day and no special election is called to fill the vacancy, the office must be on the ballot to fill vacancy at the general election.  Political party nominations must be made by convention.

Results Available on Election Night
0 Precincts Counted
Back: Past Elections
This webpage was printed on September 30, 2022. For the most current election-related information, visit the ".$clientCounty." County, Iowa, Elections website at REPLACE_THIS.
powered by